The Fling Race Series returns to Bristol Dragway for its thirteenth year of events at one of the most iconic dragstrips in the country with the RAD Torque Systems Fall Fling presented by Optima Batteries. A beautiful week of weather was in store for the last stop of the 2022 Fling Tour featuring elite bracket racers from across the country.

The first of five days of racing fired up with the Rob’s Automotive Test and Tune at 2 p.m. run in conjunction between rounds of the exclusive Super Tuesday American Race Cars/Race Tech Shootout where 32 racers battled it out for the opportunity to take home one of the two dragster chassis with the winner having choice between builders.

Gulitti used a .017 advantage on the tree to light up the scoreboard over Troy Williams Jr. who took .0004 at the stripe for the loss, and Pennington turned it .002 red against Sanders who put down a .017 package. Ostrowski was .039 ahead off the starting line for the win over Hicks, while Gary Williams took .004 on Sisko to advance to the round of four.

In the semifinals, Williams and Sanders were separated by a thousandth on the tree and Williams took the stripe by .019 to earn a spot in the final. Ostrowski bowed out to Gulitti after turning it just .001 red. 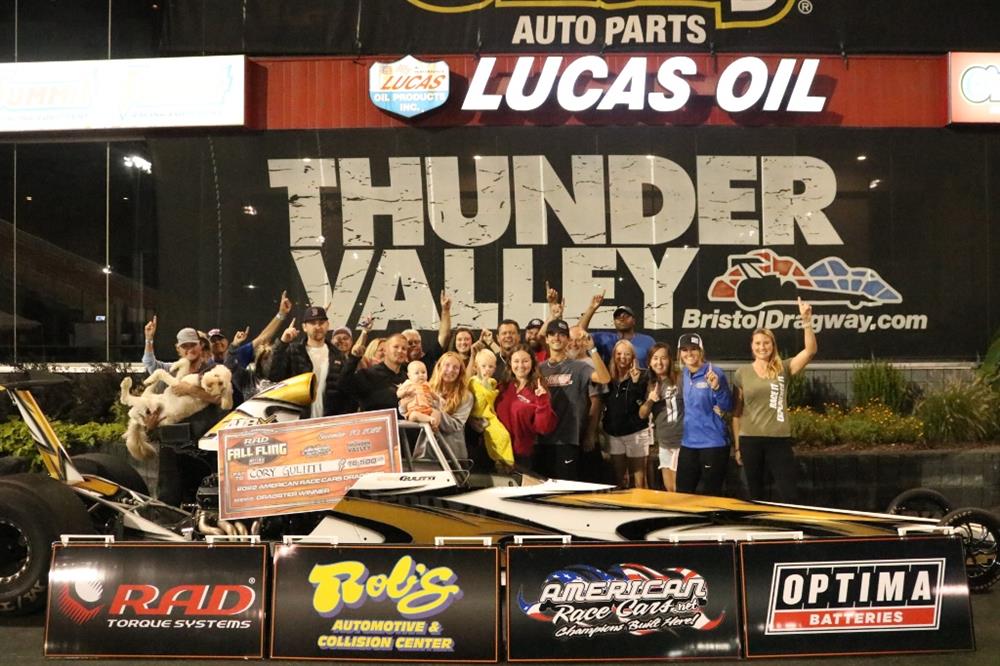 The pairing of Gulitti and Williams was a rematch of the American/Todd’s Extreme Paint Dragster Shootout at the 2021 Spring Fling Million where Gulitti took home the very same dragster he wheeled in this final. Gulitti was .006 at the hit against the .009 bulb of Williams, and Gulitti ended up .001 ahead at the stripe for the win after breaking a rocker in the semis. Gulitti chose the American chassis, while Williams walked away with the Race Tech.

The final Fling of the year had racers pouring through the gates at Bristol Dragway for the RAD Torque Systems Fall Fling presented by Optima Batteries. The Advanced Product Design $15,000 Warm-Up race saw 496 entries stage up for the first round serving as a record-high Wednesday car count for any Fling event at Thunder Valley in years past.

All racers on property were given one time run session which ran into the early afternoon with the unprecedented amount of entries. With an efficient format in which drivers are assigned a Fling competition number and run in four designated groups — and a great crowd of cooperative racers — eliminations moved smoothly into the evening as the track lights illuminated the dragstrip.

Smiley used a substantial advantage on the hit to take the win over McKinney, while Lockhart advanced past the .008 breakout of Sanders with just a three thousandths separation on the tree. While Hastings was .004 to the .026 of Mayer, he bowed out of competition by way of a .010 breakout. Manuel let go .001 to the .007 of Nelson and ran it down to be dead-on seven for the win.

In the semifinals, Mayer advanced past the .002 redlight of Manuel, while Lockhart let go .000 and ran it down to be dead-on six for a .006 package to eliminate the ‘95 Grand Am of Smiley, creating an all-dragster final round.

Both Mayer and Lockhart were first-time Fling finalists, and it was Mayer who laid down .013 total for the Advanced Product Design $15,000 Wednesday victory, hoisting the first Fling big check and hardware of the weekend.

ATI Performance Products $30,000 Thursday at the RAD Torque Fall Fling presented by Optima Batteries at Bristol Dragway shattered the record for the highest entry count of any Fling event over the course of 13 years with 640 staging up for the first round.

An hour and a half rain delay did not interfere with the momentum of the program or the spirits of the racers as the track was dried and prepared to continue eliminations. Four run groups designated by Fling competition numbers allowed racers to know when they could expect to make their next run with the magnitude of cars on property.

The group of six drivers left standing for round eight was made up of Kevin Brannon, Robert Holton, Coty Whitt, Josh Luedke, Cory Gulitti, and Chase McKay. Brannon let go perfect to the .003 of McKay and had the lesser of the two breakouts to earn the bye in the semifinals. Whitt was .004 on the red side which allowed Luedke to advance, while Gulitti had a .013 advantage off the line with a .005 reaction to move past Holton.

In the semifinals matchup to see who would meet Brannon in the final, Gulitti was .006 and dead-on nine getting one thousandth behind at the stripe for the loss against the .014 package of Luedke.

The classic door car versus dragster final would be a faceoff between two multi-time past Fling event winners — Brannon who most recently picked up the 2022 Spring Fling Million main event victory, and Luedke with a 2022 Summer Fling 15K Wednesday win just several weeks prior. Despite Brannon’s advantage off the starting line, it was Luedke who ran it down to be dead-on two for the ATI Performance Products $30,000 Thursday win after navigating through 10 rounds of competition.

Moser Engineering $100,000 main event Friday brought the largest Fling car count in history at an unprecedented 674 entries during the RAD Torque Systems Fall Fling presented by Optima Batteries at Bristol Dragway. The best bracket racers from across the country had their sights set on the biggest payday of the weekend, which would make for one of the most prestigious Fling victories in the franchise’s thirteen years of events given the enormity of the field.

The best door car and best dragster package of the weekend throughout eliminations from Wednesday to third round Friday met in a match race for a set of Brodix cylinder heads. Matt Dadas qualified on the door car side with a .001 package (perfect and dead-on one) while Lee Dixon was the representative on the dragster side after being .001 total as well (.001 and dead-on zero). Dixon showed why he deserved to be in the runoff by throwing down a .002 package to lock Dadas out, and picked up the brand new set of SR20 heads.

The Thunder Valley track lights reflected off the racing surface as the last six racers staged up for the quarterfinals - three door cars, and three dragsters. Miller was .002 off the line with a commanding starting line advantage to take .006 at the stripe for the win over Willis-Parker. Denton was .006 to the .021 of McKinny, but by way of Denton’s four thousandths breakout McKinney took the win. In the following pair, Collier was .005 ahead at the hit and took .004 to run dead-on eight to eliminate Dadas.

In the all Miller-built dragster final for the Moser Engineering $100,000 payday, Miller was once again double “O,” take double “O” with a .005 reaction time to have a substantial starting line advantage over Collier and took .007 at the finish line for the win. The $100,000 victory would be his first Fling event win to add to his already impressive super class and bracket racing resume.

Matt Dadas picked up the JEGS Performance $30,000 victory! He let go .001 in his '98 Grand Am for the win over Bart Nelson to secure the last Fling payday of the 2022 season and his first ever Fling event win.
Dadas also qualified for the Brodix Best Package Runoff for the SR20 heads on Friday night with a .001 package, and made it down to six cars in the $100,000 main event.
The Kyle Seipel Never Give Up Award was presented to Mark Kidd of Twin Falls, ID for his comeback effort after breaking an axle in the middle of Wednesday’s eliminations. After replacing both axles and center section, Kidd laid down consistently good laps and carried two entries into round six of the $100,000 main event. He was given $1,000 and a custom crystal plaque courtesy of Ivey Hutto’s Golf Cart Sales and Service.

Two spectacular performances over the week from both Ray Miller III and Matt Dadas made for a tough decision in crowning the 2022 Fall Fling MVP. With consideration for both racers’ round-by-round statistics and round wins, the Fling Team used Miller’s $100,000 event win as the deciding factor. Miller received a $1,000 bonus and a Todd’s Extreme custom-painted Impact Racing helmet.

The RAD Torque Systems Fall Fling presented by Optima Batteries concludes the 2022 Fling Race Series season as the largest Fling in the thirteen years of the series with a highest car count of 674 on $100,000 Friday.